We can’t go through life without  being part of a group, a club, or an  organisation. Schools, the  workplace, and organised religions are all like being part of a club. Clubs have something in common. When we’re in a club we enjoy a sense of belonging, friends, shared values and an agreed way of doing things. But being part of a group also has its dangers. We can tend to see our club as our territory, and woe betide anyone who treads on our patch. We see the   newcomer as an outsider…. worse, a mistrusted outsider. A new teacher arrives in school with some radical new views. A new supervisor joins the workplace and changes the coffee breaks. In church, someone arrives from a different parish with their own ideas about how something should be done. We don’t like it. Routine gives us a sense of security, and when that routine is changed, particularly by an outsider, we resist. If the outsider is successful at what they do, we resent it even more because we are left feeling threatened. Clubs can be good, but they are not good if we close ranks against someone else working to the same ends.

In today’s gospel reading, the disciples complain to Jesus about an exorcist who is working as an outsider to their group. That the exorcist is working successfully is making them feel all the more threatened. Jesus’ answer is very plain. “Whoever is not against us, is for us.” In other words, if someone is   working towards the same end, it doesn’t matter whether or not they are in the same ‘club’, or whether their ways are quite the same as ours.

Jesus’ lesson is very relevant to us today. Catholicism is not served by rejecting other religions. Accepting other Christian religions doesn’t have to mean a watering down of our own beliefs. God is bigger than any ‘club’ and by following Jesus’ example we are working ‘for’ each other and not ‘against’. 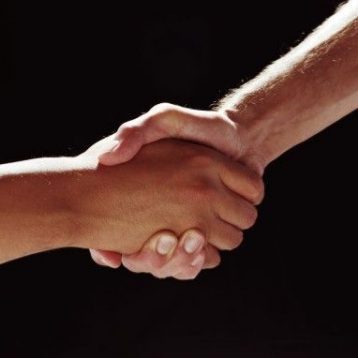