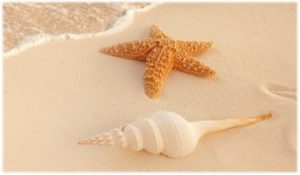 In the Bible, the Virgin Mary was named Sella Maris, which means star of the sea. The Virgin Mary is a symbol of guidance and protection for people in difficulty such as sailors who sought her for their safe journeys. The star and the starfish are considered important celestial symbols in the bible representing infinite divine love. The following spiritual story, invites us to be hopeful and enthusiastic, important attributes in all our lives.

Once upon a time, a long, long time ago, an elderly man was taking a walk along the beach. He was relaxed and content. The sun shone brightly in the sky, the birds wheeled and sang, the waves washed ashore, the sand was firm underfoot, and a gentle breeze tempered the heat. Some distance in front of him, the man saw the figure of a young man who was behaving strangely. He bent down from time to time, went over to the sea, bent down, and then back to the strand again as he walked along. ‘What’s he doing?’ thought the old man, ‘Maybe he’s just happy, celebrating life with this strange dance of his. I’ll ask him’.

A few moments later they met and greeted each other, ‘Good morning’. ‘A beautiful day’. ‘Isn’t it lovely by the sea?’ And so on. Then the elderly man said, ‘As I was walking along I saw you bending down, and then going over to the sea and back again. Do you mind if I ask what you were doing? ‘Not at all’, replied the young man. ‘Do you see all those starfish that have been washed up on the shore? The whole length of beach is lined with them. They’re exposed to the wind and sun, and they’re drying up. A drying starfish is a dying starfish, so I’m putting as many of them as I can back into the water. Those that survive will produce the next generation of starfish, and life will go on’. ‘How many have you put back in? asked the old man. The young man replied, ‘I don’t know; maybe fifty or sixty’. ‘So what’s the point?’ said the old man. That’s such a tiny number among the thousands that line the shore. What difference does it make?’ The young man didn’t reply. He bent down, picked up a starfish, and carried it back to the water. Almost immediately, it took on a healthy, natural appearance as if happy to be back in its own environment. ‘It made a difference to that one’, he said.

For those in a hurry: ‘Those who are faithful in small things, will be faithful also in big things’. (Jesus, in Luke 16.10)

When things go wrong, as they sometimes will,
when the road you’re trudging seems all uphill,
when the funds are low and the debts are high,
and you want to smile,but you have to sigh,
when care is pressing you down a bit, rest, if you must, but don’t you quit.
Life is queer with its twists and turns,
as every one of us sometimes learns,
and many a failure turns about,
when he might have won had he stuck it out;
don’t give up though the pace seems slow – you may succeed with another blow.
Often the goal is nearer than it seems,
to a faint and faltering man,
often the struggler has given up,
when he might have captured the victor’s cup,
and he learned too late when the night slipped down, how close he was to the golden crown.
Success is failure turned inside out – the silver tint of the clouds of doubt,
and you never can tell how close you are, it may be near when it seems so far,
so stick to the fight when you’re hardest hit – it’s when things seem worst that you must not quit.