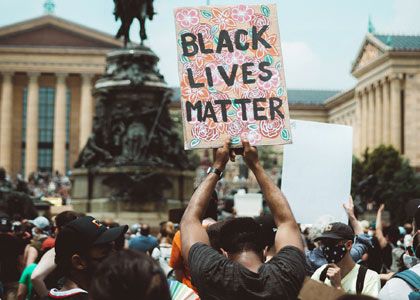 We are seeing now in the cities throughout America, the kind of violence that comes after justice is denied, and after oppression has lived in a land and amongst a people for far too long.

What we’re seeing in America, is a new brand of   activism. Young blacks, young whites, young browns, college students who are out of school now because of COVID-19. They are now fed up and tired, and they’re standing tall. They’re standing toe-to-toe with authorities asking for denied justice.

Dr. Martin Luther King said that protest is simply the voice of the unheard. People like George Floyd, who suffered by a brutal murder, have been unheard too long. Millions across the Globe are standing now to demand justice. What you’re seeing now is simply America being called upon to pay the taxes for the racism and injustice that’s gone on far too long. If society want to stop paying the taxes for the wrong, then it also has to sit down and hammer out a new agenda where everybody’s included.

Racism is a virus that is not contained just in the U.S. but in every community across our planet. Here in Ireland in recent days I have listened to many testimonies regarding how people are judged and prejudiced because of the colour of their skin and unique ethnicity. The scandal of Direct    Provision System in this Republic will be lamented by future generations. It’s tolerated by the establishment because of the toxic silence of xenophobia on the ground.

Coronavirus has given us all an incredible opportunity to experience something of the vulnerability that so many of our brothers and sisters of humanity have lived with always.

With newly opened eyes, we should be meeting each other with compassion and empathy and accountability. And yet, hate and polarization dig in, and we squander the life-giving wisdom we could gain!

We are threatened by infection on the rise from not only one pandemic but two. There is COVID-19 and there is the deadly virus of white supremacy. Each have their super spreaders.

Science has guided us in flattening the curve of one. Let us pray that Holy Spirit, She who dwells in all people and creates unity across diversity, will offer the vaccine and cure for the other.