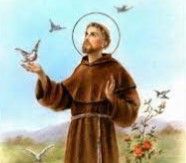 This week we celebrate the Feast of St. Francis. St. Francis is among the most beloved and most familiar of all the saints of western Christianity. He remains as popular today as he was in his lifetime. His love of animals and of God’s creation have made him an icon of the environmental movement. His joy, playfulness, and child-like faith offer an alternative to a Christianity that often seems to take itself too seriously.

Francis was born in a time of rapid social change. Italian towns were growing and the monetary economy was emerging, then as now, the church was finding it difficult to respond quickly to these changes. Francis grew up like many boys in urban settings. His father was a cloth merchant but Francis participated in a number of military campaigns and enjoyed the sorts of things that young men typically do. In his early twenties, he began to take a deeper interest in spiritual matters, and had a number of religious experiences that culminated in a vision of Christ, in which Christ told him to “repair my church.”

Key to Francis’ devotion to Christ was his desire to imitate him. A common phrase used of him was “naked to follow the naked Christ.” When he finally organized his followers into an order (that was ultimately recognized by the church), he took as his model Jesus’ words when sending out his disciples two by two. So as Jesus said in Matthew, they were dressed in tunic and sandals with a rope for a belt. They had no money or possessions. Imitation of Christ ultimately became identification with Christ. Near the end of his life, after he had given up control of the religious order he had founded and retreated into a life of solitude, he is believed to have received the stigmata—he bore on his hands and feet the wounds Jesus Christ received on the cross. It is the first recorded example of that phenomenon in the history of Christianity. His reception of the stigmata is evidence of his total identification with his Lord. It is also an example of another trend to which Francis gave impetus. Although the suffering of Christ was already an important focus of Christian piety by the time Francis came on the scene, his devotion to it helped make it wildly popular in the later Middle Ages.

Upon his election in March 2013, Pope Francis said: ‘Some people want to know why I wished to be called Francis. For me, Francis of Assisi is the man of poverty, the man of peace, the man who loves and protects creation.

Since then, the Pope’s Franciscan “accent” has become increasingly evident. His manner of living is both faithful to the teachings of Jesus and illuminated by the spirit of the “poor little man” from Assisi. The title of Pope Francis’ encyclical on the environment Laudato Si is taken from the first line of St Francis’ Canticle of the Creatures which is one of the best insights into the saint’s vision for life. It is crucial to grasping how St. Francis understood the message of the gospel — and may offer a glimpse into Pope Francis’ own vision for the world.

After his election as pope, it was revealed that Pope Francis had been the runner-up in the previous conclave in 2005 that elected Pope Benedict. But in 2013 it was generally thought that Jorge Bergoglio was too old to be considered again, and he must of thought so himself, because he bought a round-trip ticket from Buenos Aires to Rome for the election.

Yet, as the conclave proceeded, Bergoglio had to think again what being pope could mean, and what name he would choose if he were elected. By becoming Pope Francis, he managed to express in that name much of what he hoped to accomplish during his papacy. St. Francis of Assisi was synonymous with themes Pope Francis quickly made his own: He was devoted to the poor, he preached God’s mercy, he sought to reform the church and he was passionate about caring for Creation. I pray, as we enter a new Season of late autumn, we all will be inspired to live simply and be nourished by the rich gift, which is life itself.

Lord, make me an instrument of thy peace;

Where there is hatred,

Where there is injury, pardon;

Where there is doubt, faith;

Where there is despair, hope;

Where there is darkness, light;

Where there is sadness, joy;

And all for thy mercy’s sake.

Grant that I may not so much seek to be consoled as o console;

To be understood as to understand;

To be loved as to love;

For it is in giving hat we receive;

It is in pardoning that we are pardoned;

And it is in dying that we are born to eternal life.