Rising to the Challenge

It is hard to feel sorry for the third servant in today’s gospel. The first two servants are praised for making the most of the ‘talents’ (money) given to them by their master. In return, they are promised even greater things. The third man, paralysed by uncertainty, buries his small amount of money in the ground instead of  doing something with it.  His actions are based in fear—he has heard the master is tough and de does not want to take any risks. At least he is able to return what he has been given, he reasons.

But he is shocked to learn that instead of praise, or even a neutral reaction to match his own neutral actions, he is reprimanded as ‘wicked and lazy’ and cast out. This parable has been described as a story of ‘tragic miscalculation’. The servant didn’t do anything awful —which is why we tend to have some sympathy for him — but he didn’t do his best either. The real tragedy is not that he didn’t make any more money; it is that he failed to appreciate the opportunity he had been given and to make the most of it.

We are all dealt different cards in life, and undoubtedly some are much tougher than others. We are like the servants in the parable who are given different amounts of money to look after. The point is not the amount of ‘talents’ given to each. It is not the circumstances of our lives or our natural gifts that are important, but how we use them. Jesus was cautioning against playing it safe. Instead of turning inwards or living in fear, we are called to meet challenges head on and discover what wonderful things might happen. 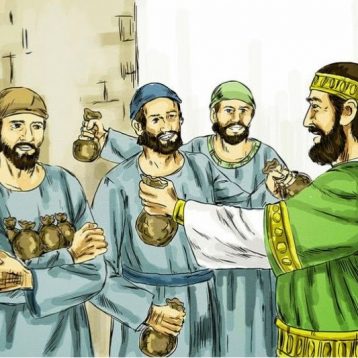