Belief is central to identity, and we live our lives based on our systems of beliefs. Faith, particularly organised religion, demands a faith that requires adherence to certain rules, requirements, etc. When you get into the Catholic Church, you’re dealing with not only 1.2 billion followers, but also two millennia of doctrine, dogma, history, and conflict that continues to this day. It is an awesome and terrifying responsibility to be the leader of that faith, to stand as “Jesus’ representative here on Earth,” and know that you are only human with all the faults that entails. Fernando Meirelles’ The Two Popes skillfully examines that gulf between the human and the divine and where two religious figures of conflicting beliefs fall into it. Jonathan Pryce and Anthony Hopkins are fantastic in finding the humanity in their historical figures as they show the burden of their responsibilities, the grace in their failings, and what it means to be “Pope” in the 21st century. 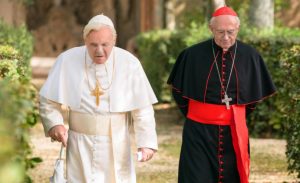 The film begins in 2005 with Catholic cardinals gathering following the death of Pope John Paul II to elect a new Pope. Cardinal Jorge Mario Bergoglio (Pryce), an Argentinian who shuns the finery of the Church in favour of ministering to the poor and pushing for reforms, has no interest in becoming Pope. Cardinal Joseph Aloisius Ratzinger (Hopkins), a traditionalist who knows how to glad-hand and get the votes for the job, eventually is elected Pope Benedict XVI, but Beroglio makes a surprising second-place finish. Seven years later, the Church has become drenched in multiple scandals, and Bergoglio is looking to retire so he can live out his days as a simple Priest. However, he is called to Rome to visit with Benedict and talk about retirement. Benedict doesn’t want Bergoglio to retire because it will send a signal that a major reformer has given up on the papacy, and Benedict has other plans for the humble Argentinian cardinal.

Watching Hopkins and Pryce play off each other is a blast because you have two consummate, veteran actors playing diametrically opposed characters who, regardless of the feelings you take into the movie, are not painted as good or evil. Some may cringe at the political agnosticism of screenwriter Anthony McCarten, but The Two Popes isn’t really interested in making a statement about the entire Catholic Church as much as it’s about examining the individual man who leads it. While I wouldn’t be opposed to a movie that delves into the various controversies raised by the modern Church, that’s not the story Meirelles and McCarten are interested in telling. Instead, they want to take the unique figure of the Pope and try to find his humanity and the conflicts he has to face.

What makes those conflicts so interesting is that they depend on the divine. Everyone wrestles with his or her place in the universe, and if you’re a person who believes in God, you wrestle with man’s inhumanity to man and the silence you may hear when you try to speak with your creator. That’s hard enough for most of humanity, but imagine that dealing with it is in your job description and 1.2 billion people are depending on you. The Catholic Church exists as a bizarre political and spiritual entity that’s both important to the lives of over a billion people, but also kind of a relic of a Western European balance of power that doesn’t exist anymore. So where does that leave Benedict and Bergoglio? What does it mean to lead the Catholic Church in the present day?

The Two Popes tries to answer this question by embracing its lead characters’ flaws, although it’s certainly more Bergoglio’s story than Benedict’s. Pryce is sublime as the humble, self-doubting Bergoglio, and the movie also includes flashbacks about his life including how he became a Priest, his questionable role during Argentina’s military dictatorship, and the guilt he carried despite trying to live a life of not only piety, but also being socially conscious of the Church’s role in the lives of the poor. Benedict’s past remains more of a mystery (the film leaves his participation as a conscripted Hitler Youth hanging over the narrative), but Hopkins provides a light touch showing a man who is so disconnected from the world that he eats his meals alone and doesn’t recognise the songs “Yellow Submarine” and “Eleanor Rigby”.

Some may demand more from The Two Popes than what it’s trying to do, and I’ll admit there’s certainly room for the film to go further in exploring Benedict and Bergoglio’s differing approaches to the Church. But we shouldn’t miss the rich character study happening in front of us. We see how these towering figures of Christian divinity try to be in the world and of the world and tend to fail at both at one point or another. It’s endearing that Pope Benedict XVI likes an Austrian cop drama about a dog that solves crimes, but it’s infuriating that he was too blind to the sexual abuse scandal unfolding because he believed that confession was enough. Bergoglio chides Benedict that the Church was treating these sins like a stain rather than a wound, hoping to blot them out rather than doing the work of healing, especially for the victims. The fight between traditionalism and reform isn’t just some intellectual debate; it has serious consequences in people’s lives.

The Two Popes shouldn’t be taken as a biopic on either pontiff, but rather using their lives as inspiration for a story about how we all wrestle with our sins, our shortcomings, how we’ve changed over the course of our lives, and how all of this leads back to God. The notion of Jesus’ representative here on Earth being an imperfect person leading an imperfect system is not an easy concept, but Meirelles handles it with a light touch, never forgetting that humour and absurdity are just as much a part of the human condition as regret and despair. Even if you’re not Catholic or even if you’re not religious, you’ll likely still find The Two Popes an engaging experience that will make you rethink Pope Benedict and Pope Francis.