Time for Ordination of Women Deacons 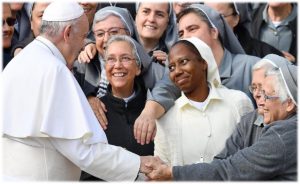 The recent National Synthesis document, followed extensive consultation with thousands of Irish Catholics across the island since last October and culminating in reports published last June from each of the 26 Catholic dioceses in Ireland as well as 29 separate submissions from interested parties. It is part of a worldwide consultation process in the Church initiated by Pope Francis in preparation for a synod of bishops at the Vatican planned for October 2023. Ireland’s National Synthesis Document said that on this island and “across the various submissions and syntheses many issues emerge consistently, including a strong desire for women’s involvement in leadership and ministries; ordained and non-ordained, and additionally a concern around the Church’s approach to the LGBTQI+ community and to the hurt experienced by its members.” It continued that “there is also a call for greater lay involvement and participation” and that “co-responsible leadership needs to be embedded at every level through Parish Pastoral Councils, Diocesan Pastoral Councils and other structures that enable this. At local level we need to ensure the voice of women will be truly integral in our decision-making. We must secure effective participation by the poor and excluded, and other marginalised groups.

“The role of women in the Church was mentioned in almost every submission received. In those responses there was a call for women to be given equal treatment within the Church structures in terms of leadership and decision making.” Many women, it said “remarked that they are not prepared to be considered second class citizens anymore and many are leaving the Church” while “several of the submissions called for the ordination of women to the permanent diaconate and the priesthood. Their exclusion from the diaconate is regarded as particularly hurtful.” The diaconate is an ordained ministry which is rooted in scripture. Chapter 6 of the Acts of Apostles records how the apostles appointed others to see to the needs of the community members who were being overlooked. This is the essence of the ministry of deacons: to serve those in our community who are poor and overlooked, whatever form their poverty may take.

Permanent deacons were very much a feature of the early Church but the ministry fell out of use over a thousand years ago, and diaconate simply became a stage on the road to ordination for priesthood. In 1967 Pope Paul VI, on the advice of the bishops of the world, restored the order of permanent deacons. In 2000 the Irish Bishops began the process to have the permanent diaconate introduced into Ireland. The permanent diaconate is open to single and married men. The first responsibility of the Permanent Deacon is to be an effective visible sign of Christ, who came to serve rather than to be served. Although the             permanent deacons will exercise their ministry on a  part-time basis, they remain at all times a deacon, and they are called in their lifestyle to reflect this. The ministry of the deacon is an expression of his being, an icon of Christ the servant. The normal areas of ministry which may be entrusted to deacons can be categorised under the general headings: Pastoral, Liturgical, Faith Development.

Pastoral – Visiting the sick; visiting prisoners; visiting the bereaved; Youth Ministry; working with the poor and the homeless; promoting awareness of the social teaching of the Church; promotion of justice and human rights.

Liturgical – Proclaiming the Gospel at Mass; Preaching the homily; assisting the priest at Mass (Sign of Peace and Dismissal); leading communion services, when need  arises; bringing the Eucharist to the sick at home and in hospitals (nursing homes); Presiding at Exposition and Benediction of the Blessed Sacrament; the celebration of Baptism; celebrating marriages; presiding at funerals – (also removals, reception of remains, burials).

I do however believe that surely women are living “Deacons” in every parish in this Country and the universal Church. Most parishes are totally indebted to women for their active ministry. Women are the back bone of every faith community. A leading theologian, recently highlighted his hopes that women be accepted as ordained ministers, suggesting that Pope Francis implements this inclusive vision of Church. Timothy Radcliffe, O.P. the former master of the Dominican Order recently wrote; “My profound hope is that women will be given real authority and voice in the church. The pope expresses his desire that this may                happen, but what concrete form can it take? He believes that the ordination of women to the ministerial priesthood is not possible, but decision-making in the church has become ever more closely linked to ordination in recent years. Can that bond be loosened? Let us hope that women may be ordained to the diaconate and so have a place in preaching at the Eucharist. What other ways can authority be shared?”

In challenging times the Gospel message is truly relevant and very necessary. As we all find meaning and purpose in life, surely this is the moment when women should be recognised as true Deacons of the Church.